"Apikorsim" by the Klezmatics 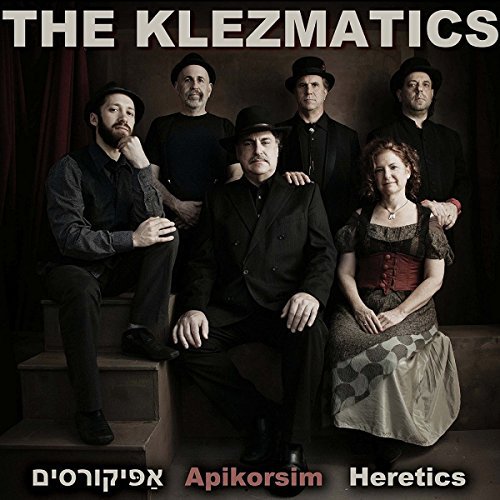 "Apikorsim" by the Klezmatics

From review on Klezmershack: "It has been a lot of years since we've heard a recording containing entirely new Klezmatics material—even more if you set aside special projects such as the Woody Guthrie Archive collaborations or their 25th anniversary party. From the opening swirls of "Der Geler Fink," followed by a slightly speeded up "Zol shoyn kumen di geulah" this is a celebration. The sound is occasionally dark; the words span life and love. The music vintage Klezmatics. It sounds good. In keeping the sometimes darker theme of the recording, we have Chava Alberstein's setting of Zishe Landau's "Ver firt di ale shifn" (who guides the ships?). The song sinks in, in waves, as the listener reflects on lost children in too many places around the globe. Elsewhere on the album, we encounter not just old and new poems set to new music, but older songs, including some gathered in the last century by folklorists Ruth Rubin and Moishe Beregovski. Fittingly, the album closes with a quiet version of an American Yiddish theatre tune, "Mazltov," with which we wish not only ourselves, but the Klezmatics good mazl." The song "Kemeshl in Ades" (Party in Odessa) on the album was collected by Ruth Rubin, and arranged by Matt Dariau, Frank London and Lorin Sklamberg.

YIVO owns the compilation of content that is posted on this website, which consists of text, images, and/or audio, and video. However, YIVO does not necessarily own each component of the compilation. Some content is in the public domain and some content is protected by third party rights. It is the user's obligation to determine and satisfy copyright or other use restrictions when publishing or otherwise distributing materials found in YIVO websites.

The materials on this web site may be used for personal, research and educational purposes only. Publication (including posting on the Internet and online exhibitions) or any other use without prior authorization is prohibited. Please visit https://www.yivo.org/Rights-Reproductions for more information about use of materials from this website.

YIVO has employed due diligence in seeking to identify copyright holders of the materials in this compilation. We invite any copyright owners who are not properly identified to contact us at yivomail@yivo.cjh.org.

“"Apikorsim" by the Klezmatics,” YIVO Online Exhibitions, accessed January 16, 2022, https://ruthrubin.yivo.org/items/show/5548.
Submit a transcription, translation or additional information on the song or the performer